COPYRIGHT WARNING:
All pictures and texts in this web page are the property of nomaallim.com. Any use of any part of those contents without the written consent of nomaallim.com shall be subject to legal procedures as per international and local laws in the concerned country. Using the name "nomaallim" or "nomaallim com" or "nomaallim.com" in the text describing the unauthorized copied content shall not constitute an exception and shall be sanctioned in accordance to the effective laws and proceedings.
Note: these works occurred on a Peugeot 5008 MPV of the first generation equipped with an AT6 automatic 6-speed gearbox.
Replacing the left engine mount on other front wheel drive transverse engine vehicles remains largely similar.

Start by removing the battery and battery tray, see our specific page for removing the battery on a Peugeot 3008 or 5008.
Turn your steering wheel to the extreme left and keep it this way.
Unscrew and remove the bolts of the battery metal seat (plate, tray).
Dismantle the inner fender mudguard without removing it completely for accessing the last bolt that holds the battery seat which is shown being removed from the car in the center and right pictures. 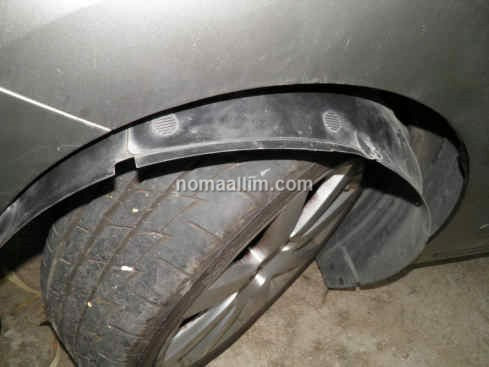 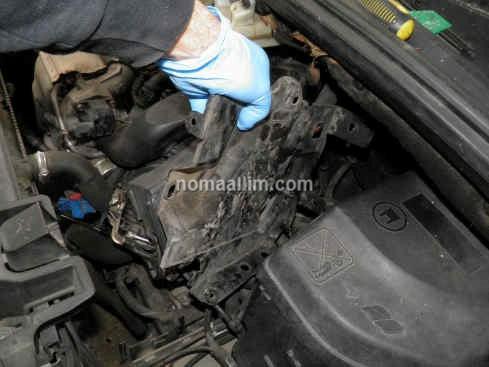 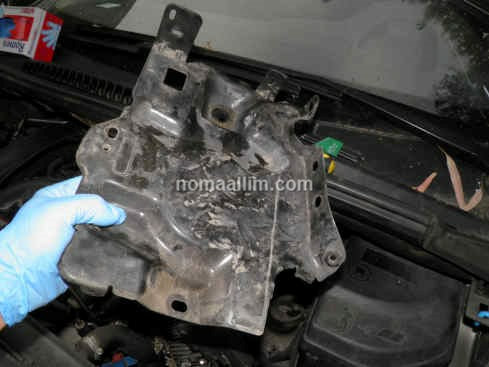 This uncovers the left engine support which fixes the gearbox to the car chassis.
Do not start unscrewing the main nut before supporting the gearbox with a hydraulic jack (with a small piece of wood between the jack and the gearbox) as shown in the middle picture. 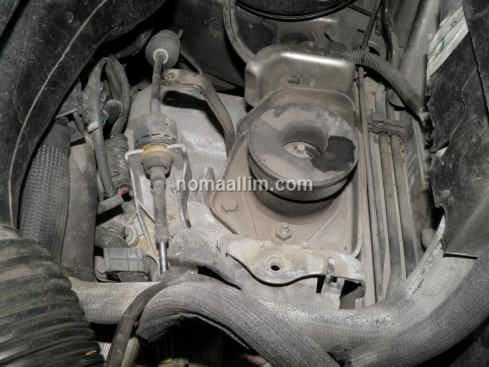 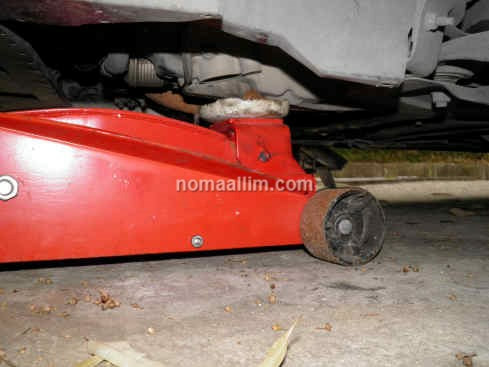 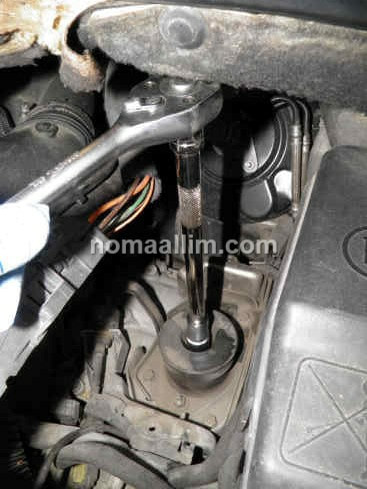 Take out the weight (if any, can be added by a car manufacturer to reduce vibrations) then unscrew the two bolts that hold the left engine support to the chassis and take it out. 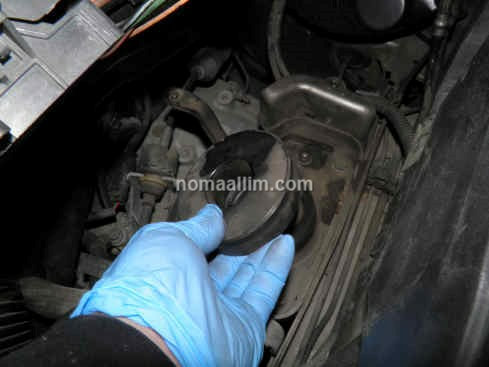 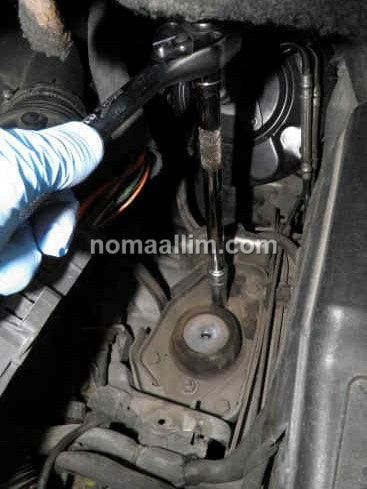 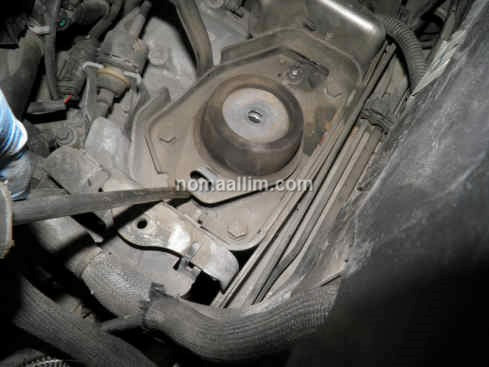 Inspect the engine support which shows clear signs of rubber ageing and enlargement.
Take out also the spacer (middle, right), a thick steel cylinder and inspect it well to make sure it is not deformed. 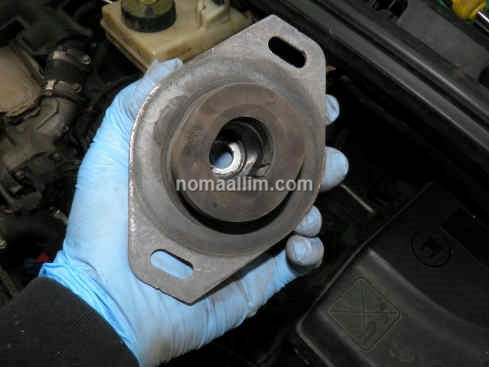 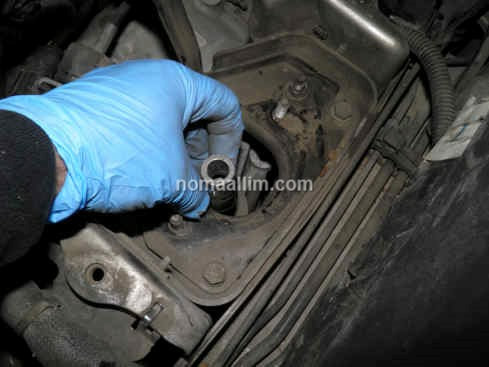 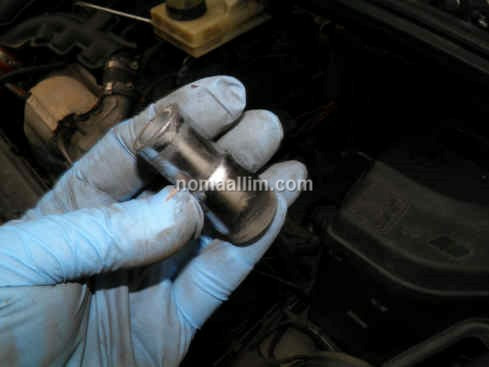 Refitting a new engine mount (gearbox mount) on a Peugeot 5008

Fit the spacer in the new gearbox mount bush then use a crowbar to push the engine in a manner that the main engine mount bolt become centered on the engine support middle hole as shown in the right picture. 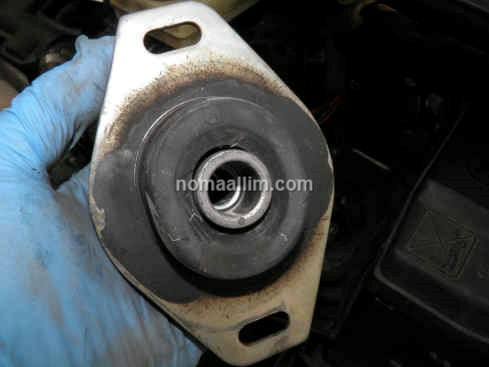 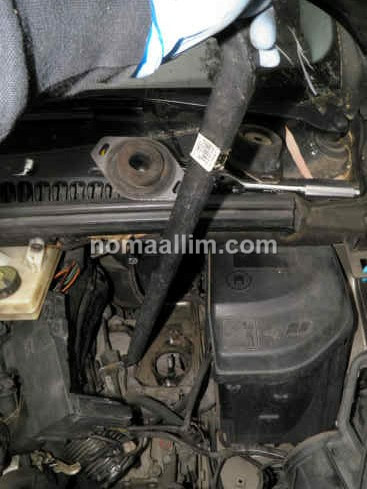 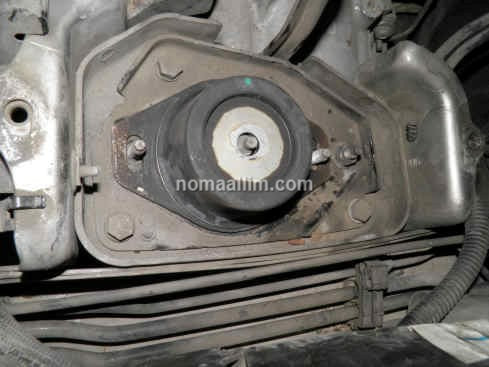 Refit the nuts of the engine mount.
Use the hydraulic jack to lift the engine which in turn lifts the engine mount's main bolt and fit the weight and its nut.
Tighten well all nuts. See our torque tightening schedule for guidance.
Reverse above steps to complete your intervention. 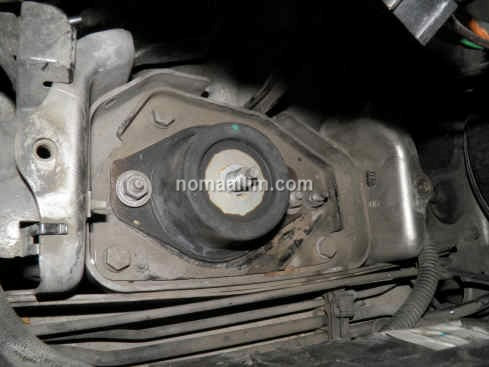 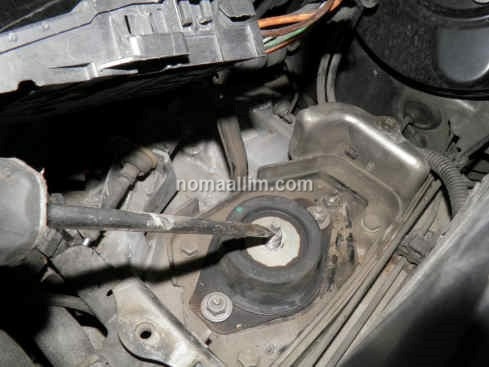 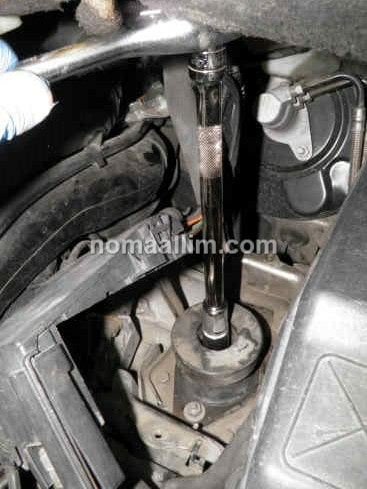