Shut off the cold and hot water supplies of the shower mixer.
This shower mixer aged 21 years. Below pictures will show the extents of the damages resulting from an initial poor installation.
This adds to the difficulty to operate the mixer handles, which could be eventually stuck.
TIP: Do not attempt to renew or repair the existing mixer. This is totally not recommended as it is time consuming, requires some seals and grease that you don't have and will lead to the renewed mixer having a short lifetime of a couple of years.

You need to have 12" monkey pliers and a 30 mm spanner.
Simply unscrew the flexible shower tube then use the spanner to unscrew the two chrome plated nuts of the mixer.
​Remove the mixer. 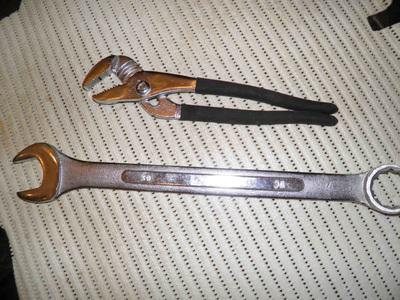 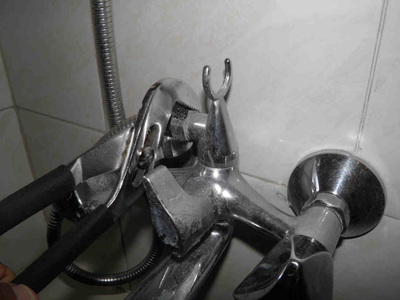 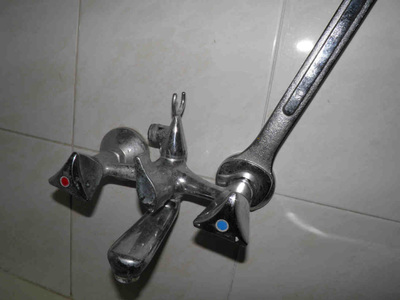 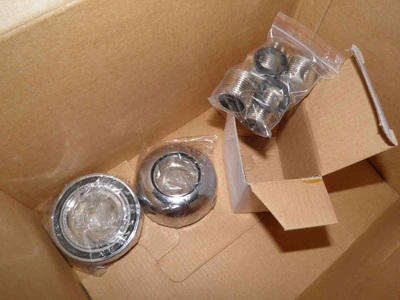 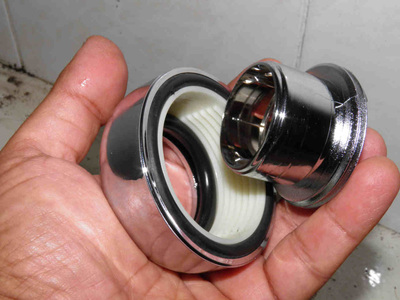 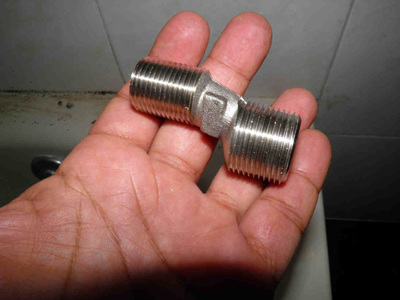 Try the new mixer on the existing male threads.
You'd be lucky if it fits exactly on the same outlets in which case you just have to carefully tighten the mixer nuts and that's it!
Most of the time the distance between the cold water and hot water tap connectors will not match the one of the existing mixer as shown in the below picture: 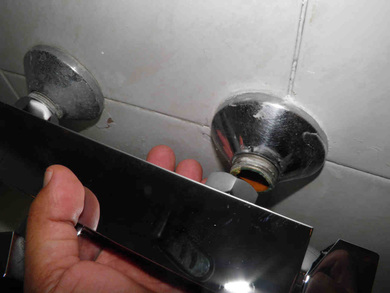 Preparing for the new tap installation

Start by unscrewing the chrome covers for removing them completely.
In this case, the holes inside the covers were not sealed by the plumber when installing the mixer, one can see the extents of the corrosion that has seriously damaged the water outlets. Such corrosion also led to the fracturing of the porcelain tiles. 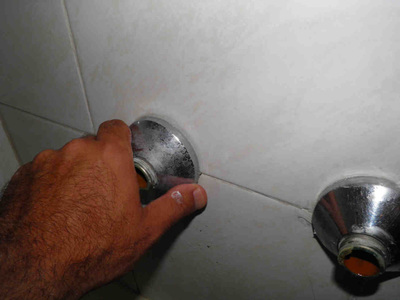 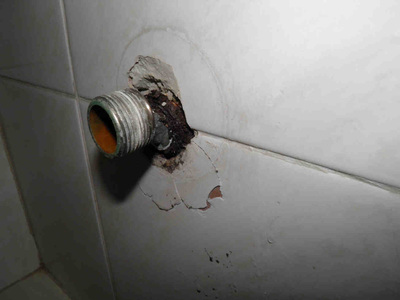 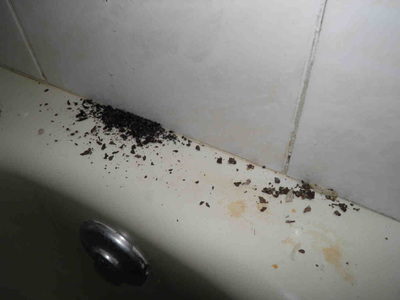 No need to panic if you face the same scenario...and check our specific page on how to replace the embedded water outlets.
Start by holding again the new mixer in front of the male threads for evaluating how much these have to be brought closer (or eventually farther). Follow the instructions in the below pictorial:
Notes:
Now plug each of the water outlets and open the water supply to make sure there are no leaks (left image).
If a leak is found, remove the adapter, seal it with Teflon and fit it again.
If not, clean the wall outlets as much as you can with a brush and a screwdriver and spray the corroded parts with WD40 at least or better a corrosion stopper. 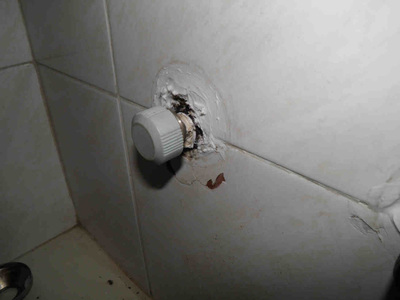 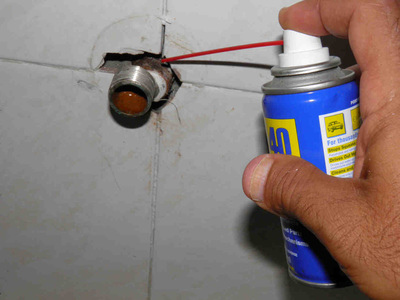 TIP: in case your tiles where cracked in surface, use some super glue to refit the largest fragments. You can later apply liquid porcelain chip repair on the remaining surface. 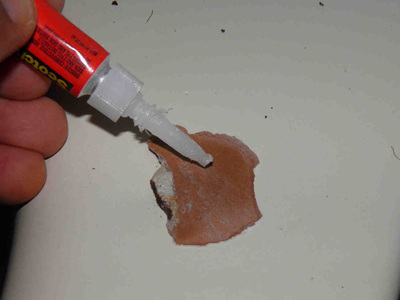 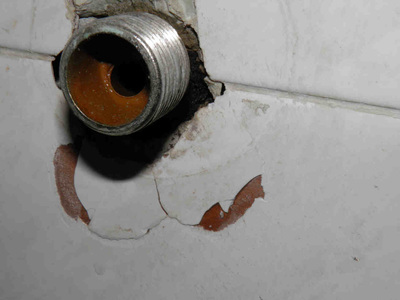 Clean well the threads with a brass brush, remove any remaining gasket with a cutter blade, seal the holes with silicone and apply one drop of oil to the thread: 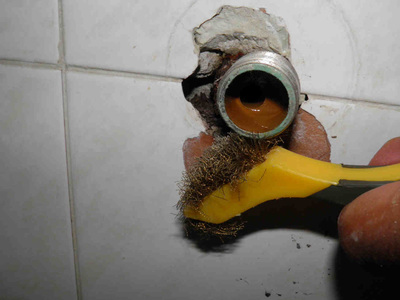 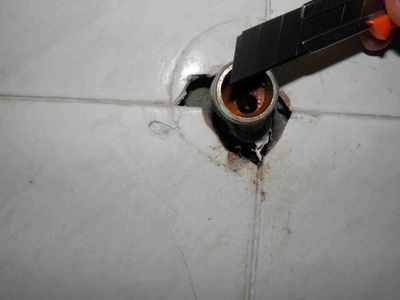 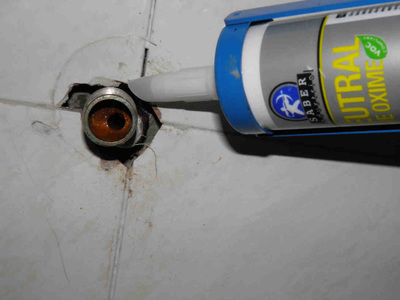 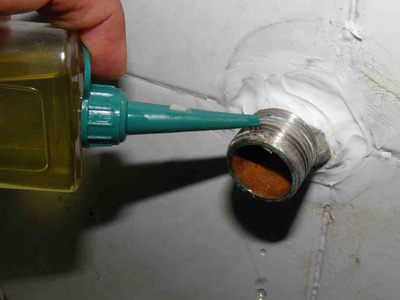 Fitting the new tap and completing the installation

Try the covers that were supplied with the tap and use them if the space between the tap and the wall is enough.
If not refit the existing covers after thoroughly cleaning them.
Place the supplied seals in the tap nuts before fixing and carefully tightening these.
Complete the installation by fitting the flexible shower.
Clean all with white vinegar. 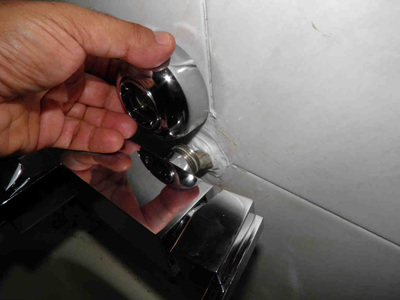 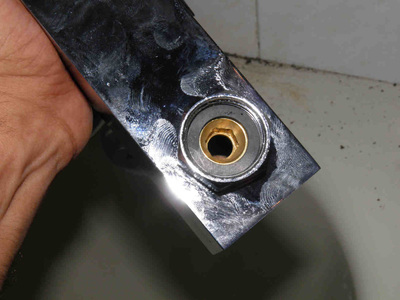 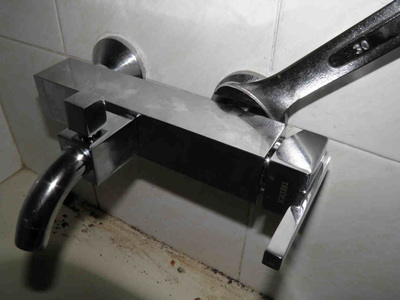 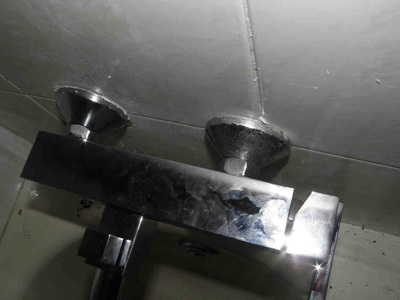 TIP: If you want to fit the new covers for sure, then you need to try them at the beginning and eventually take out the adapters and re-screw them in just enough to leave sufficient gap between the wall and the mixer nuts.