Context of the below oil consumption pictures

The below pictures are shown on a 3-cylinder Peugeot 1.2VTi engine (PSA EB2 engine) that has 153,000 Km and which oil consumption has reached 2 liters per 1,000 Km. The engine passes the compression test but other symptoms like:
The above oil consumption symptoms made it clear that the engine piston rings are worn regardless if the valves seals are worn too or not.
The decision to rebuild the engine was taken, especially the Peugeot EB2 engine is such a fuel efficient petrol engine with relatively acceptable spare parts prices and is very easy to maintain and service.
The below pictures taken after engine removal and dismantling clearly show the extents of damages to the combustion chamber and confirm above symptoms.

Iridium spark plugs that are supposed to last more than 60,000 Km can have their lifetime shortened to less than 10,000 Km with deposits invading the electrodes as shown in this picture.
The central electrode gets eroded with not much left after 20,000 Km.
Note how the three spark plugs have exactly the same problem, denoting a common issue on all engine cylinders. 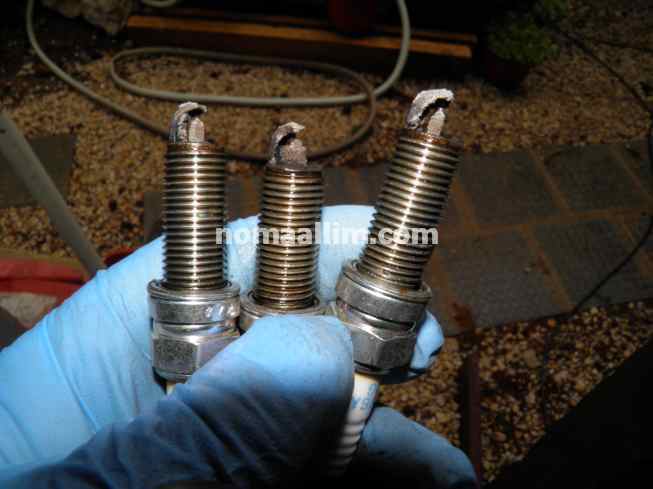 The dismantling of the engine has clearly shown the thick black and wet deposits on the cylinder pistons.
The deposits consist of carbonized motor oil that is not as hard and can be brushed out very easily.
All three pistons do have exactly the same appearance. 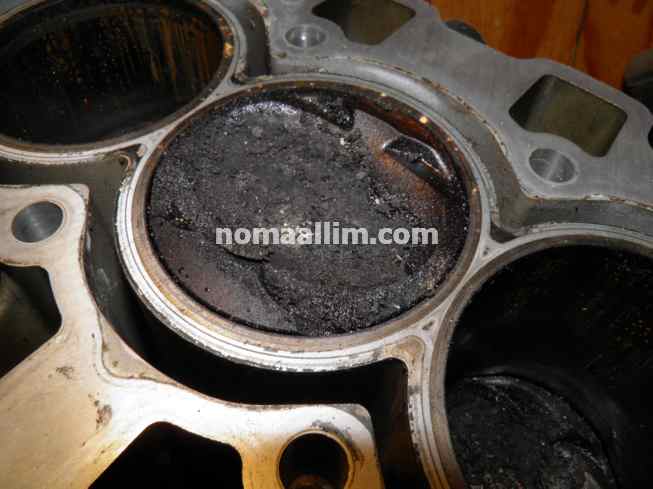 The remaining of the combustion chamber suffers from the same wet carbon deposits as a result of the excessive oil consumption, as shown on the cylinder head in this picture: 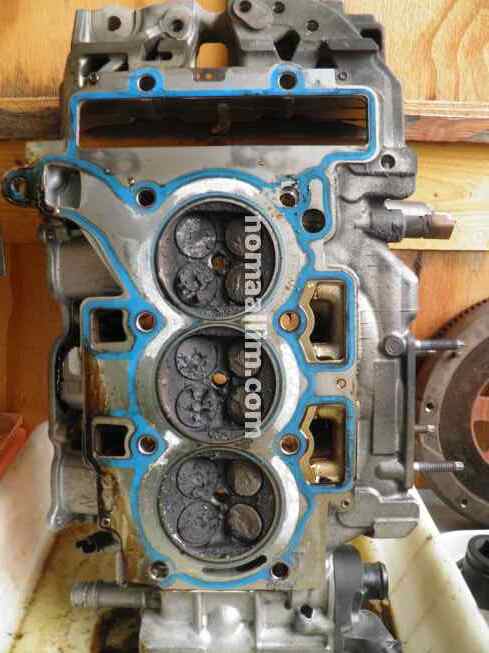 The 12 valves are impacted the same way with the intake valves having a wet black appearance and exhaust valves a brown hard deposit due to the higher temperature. 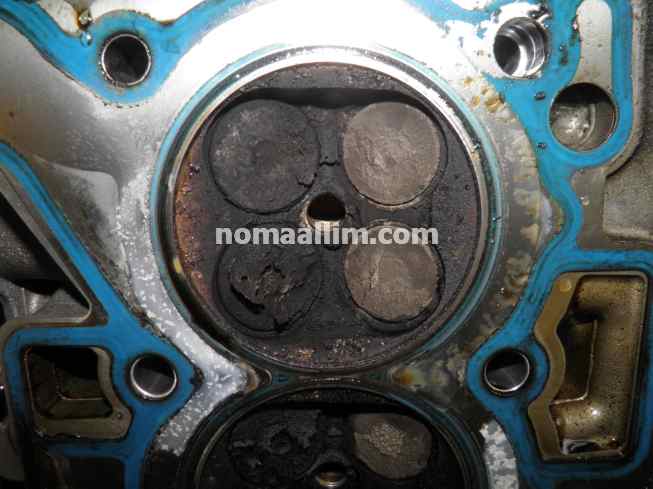 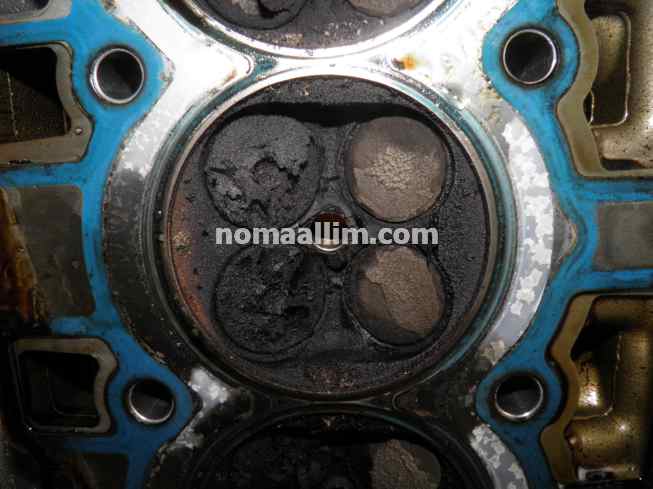 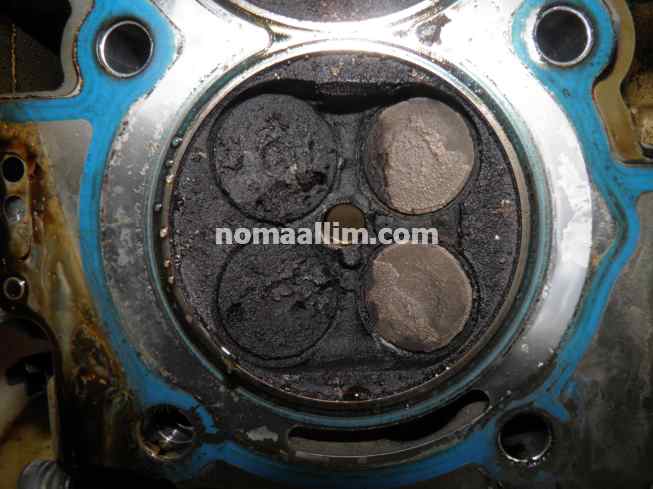 The black carbonized oil deposits are also found behind the cylinder head valves due to the excessive re-circulation of oil vapors and to the abnormal amount of oil crossing the piston rings from the oil sump into the combustion chamber. 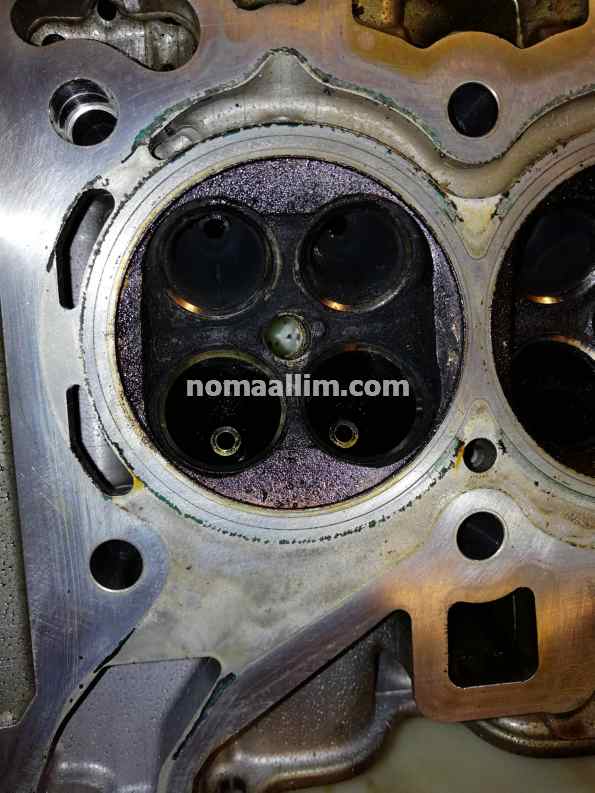 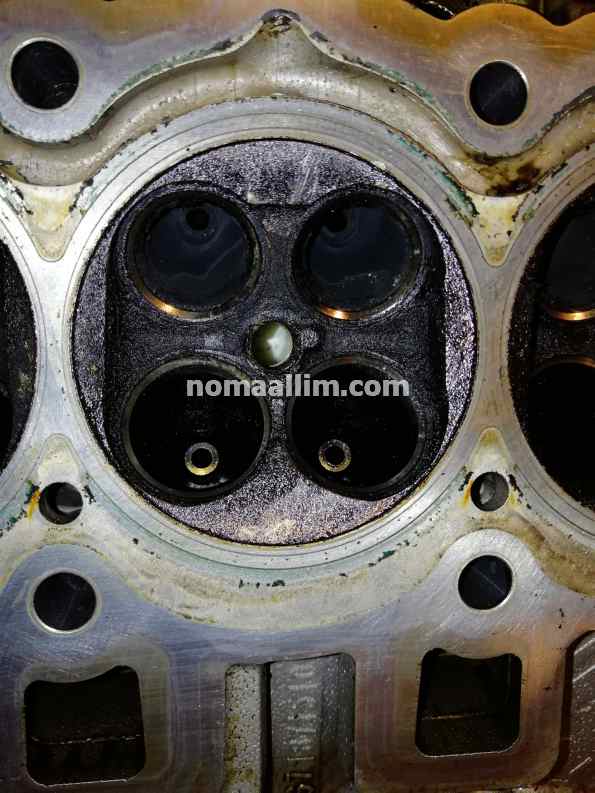 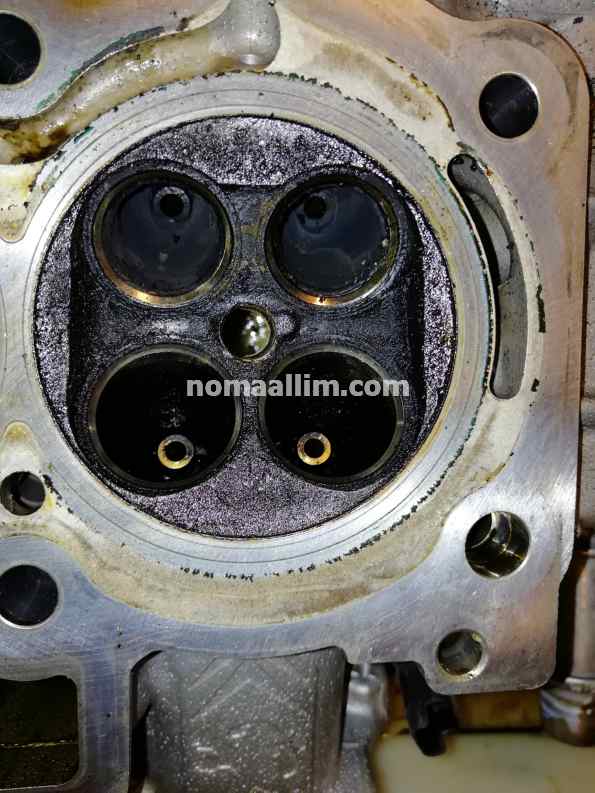 The valves rods seals in this engine became too hard as the rubber part can no more be squeezed by hand.
They have especially hardened on the exhaust valves which are subject to higher temperatures.
An attempt to hold the valve seal with long nose pliers results in the seal braking into small pieces as shown in the right picture.
The rubber valve rod seal became brittle like hard plastics. Obviously, this is a sign the valve seal was leaking excessive oil down to the combustion chamber.

OBDII codes generated as a result of the excessive oil consumption

Oil in the combustion chamber mixed in excess to the gasoline and burning all the way through the exhaust up to generating blue smoke out of the vehicle's tail does not necessarily trigger the MIL light. If it does, this can be intermittent or temporarily however associated codes with the O2 sensors and the catalytic converter (catalyst) can be found. The below OBDII codes were found in the Peugeot 208 equipped with the above shown 1.2VTi (EB2) engine: